As with the main dynamic of this book, when reviews of “Lanny” by Max Porter first started appearing, it was as if I could hear this book talking to me, and I knew I had to read it. I was not disappointed at all. 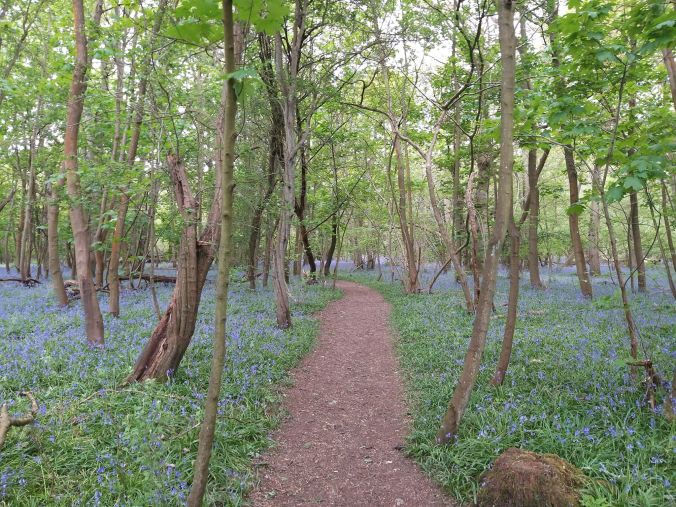 A number of themes spoke to me.  The first and over-riding one was that of the voice of the land, and the spirit of the generations through time speaking to us through nature, through our landmarks and customs, particularly in rural communities – those kinds of things often referred to as ‘the Particular‘, or celebrated by the likes of Robert MacFarlane.

Having returned to the semi-rural area where I grew up, I have been embraced by the bosom of the common-lands which surround my village, and am never happier than when on a long walk with my dog, and each finding myself travelling through time, imagining myself talking to people who may have previously trodden those same paths, whether ancestors through the generations, or air-crew who served on the old RAF base which are now disused runways, being encroached upon by gorse.

“The village belongs to the people who live in it and to those who lived in it hundreds of years ago.  It belongs to England’s mysterious past and its confounding present.”

The second was the character who lends his name to the book – ‘Lanny’ – a child who who is a bit of a loner, never happier than when playing amongst those rural surrounds, talking to nature – or more accurately, singing to himself.

Little Paul in 1974, most likely to be seen singing/swinging on the garden gate.

One of the first images which was conjured up for me when I returned to the area in 2015 was of me swinging on our front gate, a loner, happy and singing to my heart’s content.  One of our neighbours said it is was her abiding memory of me as a small child.  I had no real memory of this.  Much of the way ‘Lanny’ is described reminds me of how my neighbour described me.  I remember getting an ‘ear’ for stories, listening to my Nan’s conversations with neighbours, as I hid under her kitchen table.

The third is how it deals with more of the darker side of modern discourse – a harshness, a rush to judgement, a binary nature, and the sheer volume of gossip, thanks to social media, particularly thanks to Twitter, and Facebook community groups, but more usually, just simple word-of-mouth.

The book was a sheer joy to read – I just could not put it down.  Some of the devices it deployed gave it a particular excitement.  As a lover of the vernacular, and of picking up on and borrowing snatches of everyday conversations, I was enthralled by how it was able to serve up the nature of village life.  And as a relatively recent subscriber to the embrace of the land, and celebrant of the ways of what are called ‘the particular’, the development of the character ‘Dead Papa Toothwort’ to cast this shadow or articulate its voice was genius. (see also Sarah Ditum, “Max Porter’s Lanny is a story of our fraught relationship to the countryside”, New Statesman, 10/04/19).

I wasn’t expecting the central storyline – I could very easily have still have devoured the book without it – but I suppose we would not have been able to explore many of the aspects without it.

One of the reviews I read said that “It’s not as political commentary or state-of-the-nation study that Lanny speaks most forcefully.  It’s the formal inventiveness that will stay in the mind, the shapes and pairings, the sudden eruptions of imagery.  It’s the idea of Lanny’s DNA as a magic trail shimmering through back gardens and playrooms, or his mother’s dream of herself as a Renaissance painted Madonna.  Porter’s writing is poetically concentrated while also deploying a wonderfully common-or-garden kind of language, loved and used, rolling off the tongue.” (Alexandra Harris, “A joyously stirred cauldron of words” – The Guardian 08/03/19)

While I agree wholeheartedly, I don’t want to lose sight of that wider commentary of taking of the temperature.  I’ve been reading the book with the backdrop of the Local and European Election campaigns of 2019, and the stasis around the downward spiral of the Leave versus Remain circus show.

On a personal level, I’ve never identified more with my four year old self, singing and swinging on that gate than I do today.  I can feel myself retreating from the hot-air and bustle of Twitter (where contributions rarely seem to add anything to a debate, and merely serve to enable the contributor to be seen to be throwing their tuppence into the pool for the benefit of a crowd), and swerving away from, for the main-part, the binary nature of loud, ill-informed postings on community Facebooks.

Reading ‘Lanny’ has helped me reflect on many of these issues.  I’d ended up working in PR, not just because I wanted to help people amplify their messages, but also to help them understand the benefits of being quiet or silent sometimes when it helps benefit a reputation, or a message to be understood.  All those years ago, when I first started working in such a role, the PR would have more of a ‘gatekeeper’ role, in which ‘listening’ was as crucial a part as the communicating.

Now, with everyone having a myriad of social platforms (and being on them 24/7), that is less so.  Yes – that is great from a democratising perspective.  And yes – there still remains a role for good counsel/advice from the best practitioners in the business.  But for the most part, I can only reflect that it has also meant a huge pressure for those on these platforms (that’s beyond PR) to be saying SOMETHING and generating CONTENT, regardless of the quality – and unbelievably, listening less (even though the platforms could enable them to do this more).  There is more noise than ever out there, and the incentive for it be binary, to be aggressive, and not to adhere to many of those aspects of quality practice built over years of experience – whether journalism, or PR – and some of these themes chimed for me on the central storyline in ‘Lanny’ too.

In the just the last couple of days, two example illustrated this perfectly.  The first was one of the only major ‘televised’ debates of the European Election campaign, broadcast via The Daily Telegraph Twitter page.  While I know Nigel Farage has been showered with milkshake, the level of ‘filth’ in terms of ageist comments that I witnessed about Vince Cable truly shocked me.  Comment, after comment (a torrent) about his physical appearance, his sanitary habits, possible disabilities, the likely onset of dementia – if this is what social media has made possible, or encouraged for our politics, it hurts.  Secondly, we had a police helicopter hover over our street for an hour or so in the middle of the night, which, it transpires, enabled officers to successfully conclude an operation.  All that a local Facebook community group site encouraged local people do was to pile in with hundreds of ill-informed comments, and criticism for the noise the Police made, and how it kept them awake.  I really began to question whether I was living in the same world as some of these people. What was the point?

As Callum McAllister notes in the review of ‘Lanny‘ on ‘The Millions’, writing about the nature of childhood and humanity pointed to in the book, “At one point, Jolie [Lanny’s mother] sees this ‘and she realises their life at home, his time at school, what she thought of as his real existence, was only a place he visited.’  It’s a line that could only have been written by a parent: that realization that something you thought of as entirely yours is an independent being.  That your children exist when you are not there.  That they have a life beyond you.  That for them, as for everyone, they are the absolute centre of their own existence.”

“Porter extends this idea to the village at large but conveys it in the exact opposite way.  He presents it to us, in Dead Papa Toothwort’s all-hearing, typographically experimental prose, as ‘A tapestry of small abuses, fights and littering, lake-loads of unready chemicals piped into my water bed, green and decline, preaching teaching crying dying and walking the fucking dogs, breeding and needing and working.”

“By giving us this stream of unfiltered human self-involvement, Porter shows us the nature of a village as a microcosm of human society, and he shows how difficult it is for people to live with one another.  The existence of characters – such as Lanny and Dead Papa Toothwort – who seem more attuned to the world, suggests that there may be a way out.  Lanny’s character in particular implies that while self-centeredness is intrinsically human, it’s not an inescapable part of the human condition – maybe something learned rather than innate.  Early in the novel, Mad Pete gestures towards it: ‘Maybe it’s just Lanny taking things from whenever he’s been listening, soaking up the sounds of this world and spinning out threads of another.”

“Max Porter’s Lanny is an attempt to capture a village, entirely in language, and it does so by trying to represent the village’s breadth of narrative voices.  It’s an ultimately empathetic, even humanist project.  But its representation isn’t always positive.  People are human.  They’re unsympathetic, rude, racist, ungenerous, speculative.  They beat up pensioners and make false accusations and invite hysteria and sensationalism.  They can be judgemental neighbours or maybe self aggrandising, polluters or gardeners.  But in the act of reading, we’re made a mute witness to them.  Like Lanny and Dead Papa Toothwort, or Porter himself, we are made active, careful listeners.  In doing so, we give them space to speak.  We can’t live each other’s experience.  But we can start by listening to them.” (Callum McAllister , “The Choir of Man: Max Porter’s Lanny Wants You To Listen” – The Millions, 25/03/19)

We have forgotten what it means to be human.  It does not mean rejecting technology, but it does mean using it in a more savvy fashion – and using it in tandem with the physical and human infrastructure around us – people and places.  Not only will it improve the nature and effectiveness of our everyday discourse, it might also ensure we save ourselves from systems failure.  It certainly means we start listening to each other much more, rather than shouting at each other, or talking about each other in an ill-informed fashion for no particular reason other than to show-off or to entertain.

As Harris notes in her review, “Porter is telling stories that link the immediate crises of individual lives with ancient, ageless currents of feeling and experience.”  As I was focusing, reading the book, this was certainly something I was feeling.

And as Harris concludes, “The novel, though short, is optimistically intent on evoking forms of growth that capaciously accommodate all manner of personal trials and English emergencies, cumulatively making a kind of peace.”

Despite all the darkness and noise out there, and the twists and turns of the book, reading “Lanny” gave me a sense of hope.