I don’t pretend to be a serious historian, but I do take an interest in the identity of my local area.  I was born in Farnham, on the Surrey/Hampshire border, and spent the entire 18 years of childhood growing up in Yateley, in Hampshire – the town to which I returned some four years ago at the age of 45.  Our neighbouring village is called Eversley. 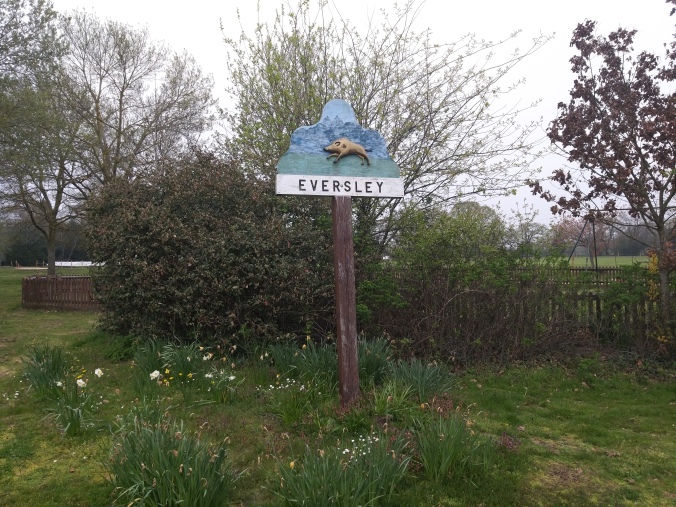 The village sign indicates the meaning of the village name is ‘wild boar clearing’, in this case, on the edge of Windsor Forest.

Dabbling in my family history, I discovered generation after generation on my Mum’s side, deepening my roots in this area of North-East Hampshire, through Eversley, Elvetham, Hartford Bridge, Minley, Dogmersfield, Crookham, Fleet, Rotherwick, Winchfield, Crondall, Odiham, Dipley, Hazeley Heath, and north towards Tadley and Sherborne St. John too.  I go back around four centuries, before the blood lines start scattering further afield.

‘Place’ is very important to me, but even with the pride I have in this area of North-East Hampshire, I’ve never felt able to pretend to be able to tap into any great wells of social, political or cultural significance for this patch.  There’s always been William Cobbett, but that’s really over the border in Surrey – and of course there’s always been Jane Austen, but somehow, I’ve always felt she’s had too good a PR campaign, with huge swathes of Hampshire laying claim to be ‘Jane Austen country’, even though she probably didn’t have anything to do with huge parts of it. 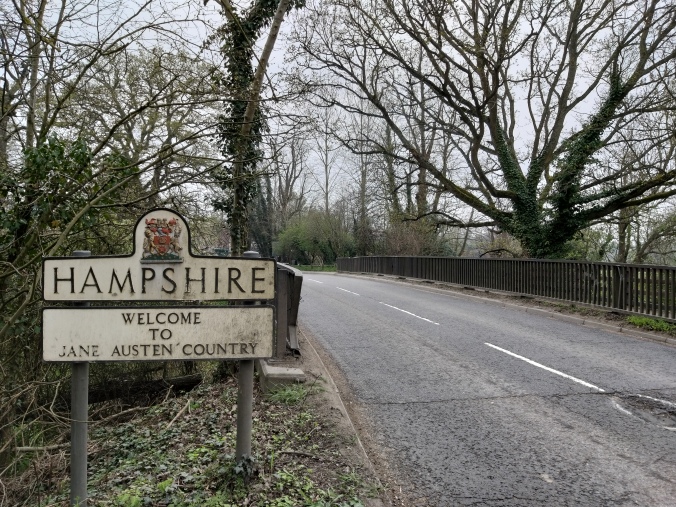 Jane Austen’s PR machine has been beating Charles Kingsley’s in this corner of Hampshire for some time – take this sign as you cross the River Blackwater from Berkshire into Hampshire as an example.

That’s why I got so excited when I first heard about plans to mark the bicentenary of the birth of Charles Kingsley on the 12th June, with a festival in Eversley – the neighbouring village to Yateley – on the 14th and 15th June.  Kingsley was rector of St Mary’s Church, Eversley from 1844 until his death in 1875, and was ordained in Farnham in 1842. 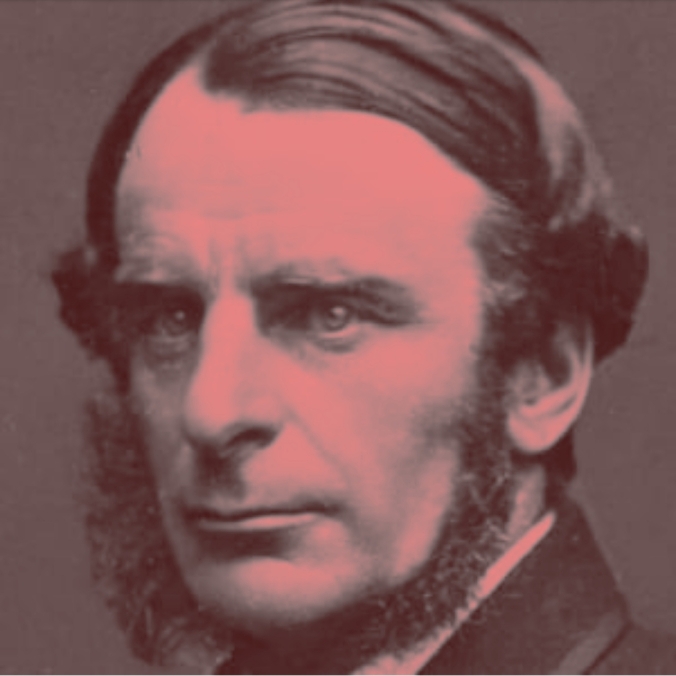 Charles Kingsley – writer of a diverse range of work; from The Water-Babies, to social commentary and natural history; historian; social reformer (helping to secure child labour reforms); and of course, local Hampshire rector.

I had no real understanding of Kingsley’s true legacy before I heard about the festival (novelist, poet, historian, social reformer, Christian socialist and keen interest in so much more) – and unravelling the various layers to his personality and career have provided an insight into just how much of a significant place Kingsley must have helped Eversley be back in Victorian times.  It has really given me a sense of pride in the relationship between my home town Yateley, and its neighbouring village, Eversley.

WATCH some clips from a BBC series on Kingsley and The Water-Babies, ‘The Secret Life of Books’ – pictured here, a stretch of the River Blackwater. Click on image above.

With Eversley effectively providing the nerve-centre where he was rector, the roll-call of names of Kinglsey’s friends, likely visitors, and correspondence through letters is quite breath-taking, and has helped me see my own ‘backyard’ through a completely different prism. 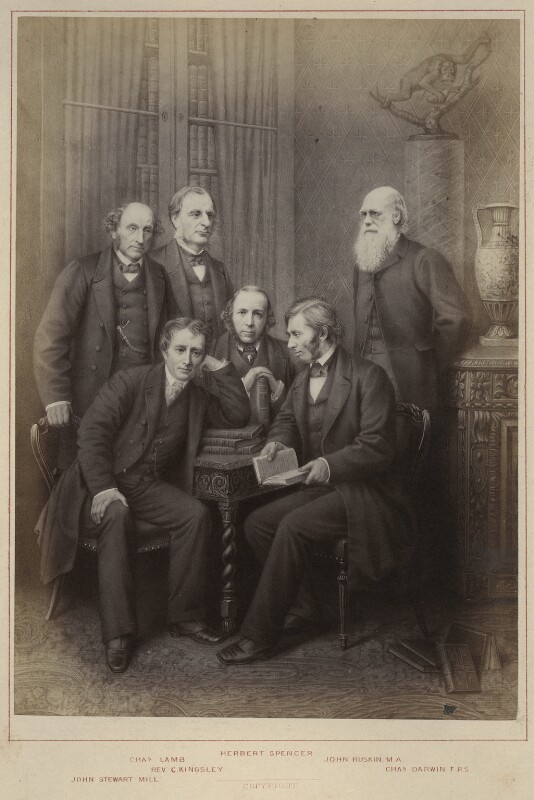 Queen Victoria and the Prince of Wales

Apparently, Kingsley’s sway in the pulpit could pull in audiences from far and wide, including officers from nearby Sandhurst and Aldershot (Blore, 1920). 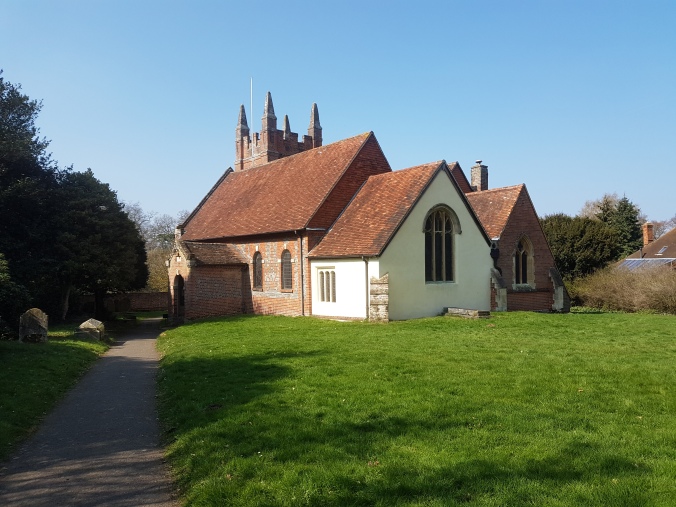 Kingsley’s appointments signpost too just how much influence he must have been able to command.  He was appointed as chaplain to Queen Victoria (1859), and in 1861, a private tutor to the Prince of Wales.  Royal patronage will have helped in his advancement in academic positions.  On Gladstone’s recommendation, with Victoria’s approval, he traded a position as Canon at Chester (1869), for one at Westminster (1873).

The front of Heckfield Place, by night.

And just like today, there was Heckfield Place.  Today, it is a source of wonder and speculation, recently snaring the prize as Sunday Times ‘Hotel of the Year’ 2018. and playing home to a range of speakers through ‘The Assembly’ series, such as Dr. Julian Baggini; Viv Groskop and Sir Michael Marmot.  It is inconceivable to think that it did not feature on Kingsley’s radar in some way. 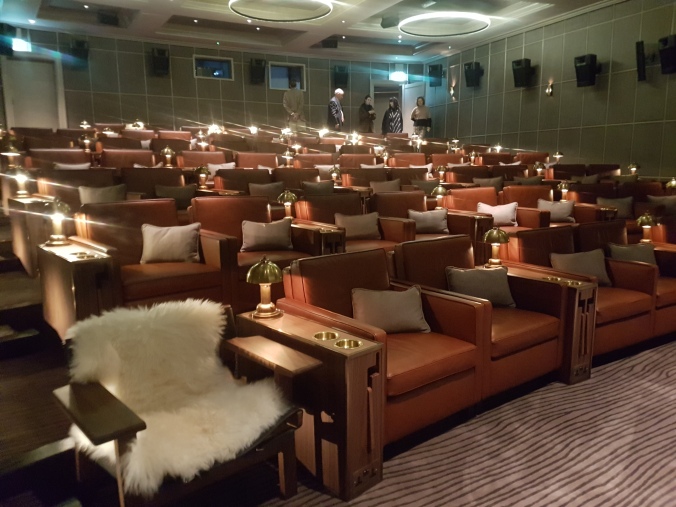 The stunning underground cinema at Heckfield Place plays host to a regular ‘Assembly’ range of talks – I can just imagine a season of Kingsley’s network, back in the day!

Back then it was home throughout Kingsley’s tenure to Charles Shaw-Lefevre.  He was the second-longest serving Speaker of the House of Commons (serving between 1839-1857), who then went on to become Viscount Eversley of Heckfield from 1857-1888.  I’d love to know more.

A bit about the physical place itself

Kingsley wrote of the local ‘commons terrain’  in his book “Prose Idylls: New and Old” (1873), London, Macmillan and Co, and particularly the chapter entitled, ‘Winter Garden‘.  You can find a digital copy of the book here.

from “Winter Garden” – pg 164:  “Grand old moor! stretching your brown flats right away toward Windsor for many a mile – Far to our right is the new Wellington College, looking stately enough here along in the wilderness, in spite of its two ugly towers and pinched waist.  Close over me is the long fir-fringed ride of Easthampstead, ending suddenly in Caesar’s camp; and hounds and huntsmen are already far ahead, and racing up the Roman road, which clods of these parts, unable to give a better account of it, call the Devil’s Highway.”

Castle Bottom, on the edge of Eversley parish – part of that ‘wilderness’ featuring commons, firs and sandy heath to which Kingsley refers.

from “Winter Garden” – Pg 165:  “I respect them, those Scotch firs.  I delight in their forms, from James the First’s gnarled giants up in Bramshill Park – the only place in England where a painter can learn what Scotch firs are – down to the little green pyramids which stand up out of the heather, triumphant over tyranny, and the strange woes of an untoward youth.  Seven years on an average have most of them spent in ineffectual efforts to become a foot high.  Nibbled off by hares, trodden down by cattle, cut down by turf-parers, seeing hundreds of their brethren cut up and carried off in the turf-fuel, they are as gnarled and stubbed near the ground as an old thorn-bush in a pasture.  But they have conquered at last, and are growing away, eighteen inches a year, with fair green brushes silver-tipt, reclothing the wilderness with a vegetation which it has not seen – for how many thousand years?”

More of that ‘Winter Garden’ – pictured here in Spring!

from “Winter Garden: – Pg.169:  “I pass through a gateway, out upon a village green, planted with rows of oaks, surrounded by trim sunny cottages, a pleasant oasis in the middle of the wilderness.  Across the village cricket-ground – we are great cricketers in these parts, and long may the good old game live among us; and then up another hollow lane, which leads between damp shaughs and copses toward the further moor.  Curious things to a minute philosopher are these hollow lanes.  They set him on archaeological questions, more than he can solve; and I meditate as I go, how many centuries it took to saw through the warm sandbanks this dyke ten feet deep, up which he trots, with the oak boughs meeting over his head.”

The view from the top of ‘The Mount’ looking back towards St Mary’s Church, where Kingsley was parish rector, and where the festival takes place.

from “Winter Garden” – Pg 171:  “So I go slowly up the hill, till the valley lies beneath me like a long green garden beneath its tow banks of brown moor; and on through a cheerful little green with red brick cottages scattered all round, each with its large neat garden, and beehives, and pigs and geese, and turf-stack, and clip yews and hollies before the door, and rosy dark-eyed children, and all the simple healthy comforts of a wild ‘heth-croppers’ home.  When he can, the good man of the house works farm labour, or cuts his own turf; and when work is scarce, he cuts copses and makes heath-brooms, and does a little poaching.  True, he seldom goes to church, save to be christened, married or buried: but he equally seldom gets drunk.”

The Revd. Peter Ditchfield made note of this when writing a piece for the nearby Arborfield Local History Society.

“… his “Winter Garden“, that great stretch of country through which you can ride fifteen miles on end, wherein flourish great Scotch firs, bright hollies with their scarlet beads, furze patches rich with its lacework of interwoven light and shade, and the deep soft heather carpet, which invites you to lie down and dream for hours; and behind all the wall of fir-stems, and the dark fir-roof with its jagged edges a mile long against the soft grey sky.

He loved to ride through the fir-forests “with their endless vistas of smooth red green-veined shafts holding up the warm dark roof, lessening away into endless gloom, paved with rich brown fir-needle — a carpet at which nature had been at work for forty years. Red shafts, green roof, and here and there a pane of blue sky, while for incense I have the fresh healthy turpentine fragrance, far sweeter to my nostrils than the stifling narcotic odour which fills a Roman Catholic Cathedral”. 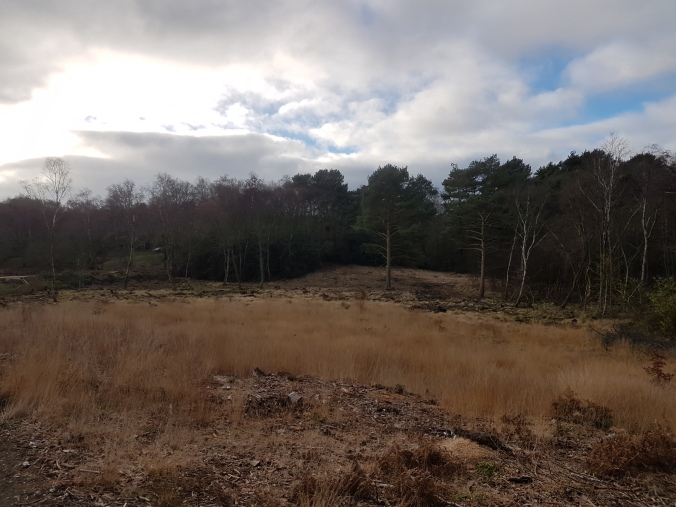 More of the barrenness, this time towards Yateley.

Kingsley admired greatly the grand old moor, stretching its brown flats right away towards Windsor for many a mile, and the green wilderness of self-sown firs. “There they stand in thousands,” he wrote, “the sturdy Scots, colonizing the desert in spite of frost, and gales, and barrenness ; and clustering, too, as Scotsmen always do abroad, little and big, every one under his neighbour’s lee, according to the good old proverb of their native land, ‘Caw me, and I’ll caw thee’. “

Kingsley died on 23rd January, 1875, and the breadth of his influence was demonstrated by the attendees at his funeral in Eversley, embracing everybody from the servants of the Bramshill Hunt, and the Gypsies of the local common, to Dean Stanley (the Dean of Westminster) to a representative from the Prince of Wales.

It has certainly made me think a little differently, whenever I might be prone to say, “nothing ever happens here”.  Much of his legacy remains to inspire and challenge, or to be explored.  Unusually in such cases, there is little ‘hype’ to ‘fall for’, which is refreshing.

Eversley today has it’s ‘celebrity’ connections – people like Laura Marling coming from the village, or Sky Sports News presenter Nick Powell living there, and former England cricket captain, Andrew Strauss.  But in Kingsley’s day, it is as if he helped connect the place, and open it to a wider range of influences unrivalled today.

It feels like a real privilege to have the programme of events marking the bicentenary of his birth on 12th June taking place on the 14th and 15th June in the field called ‘The Mount’, opposite the church where Kingsley was rector.

The festival features an outdoor opera spectacular (a ‘cantata dramatica’) based on one of his poems (Andromeda); a puppet-show interpretation of his most famous work (The Water-Babies); a play bring Kingsley back to his old parish today (starring Blue Peter favourite, Peter Duncan); a series of ‘Tent Talks‘ exploring Kingsley’s social, political and cultural legacy; a pageant on the theme of ‘child labour’ – and much more besides.  More at ck200.live .

Any proceeds from the festival go the local school which bears Kingsley’s name, and the charity, Child Hope UK.

I think the bicentenary is a good opportunity to reassess Kingsley’s contribution to the local area.  If we can put up signs welcoming people to ‘Jane Austen country’ as you enter the county, we must be able to acknowledge Charles Kingsley’s rich contribution to this particular corner of Hampshire in some way?

One thought on “Kingsley – making it quite a place”